Pasay City East High School is proud to be 50

The city had only one public high school called Pasay City High School with many annexes scattered around the city. The annex schools had only one school hymn.

The enterprising year of 1968 in the month of February, gave way for the establishment of Pasay City East High School in Malibay , Pasay City , as an annex of Pasay City High School.It started with 28 courageous and decisive mentors brought together by common interest, and 723 enrollees . Mrs. Maura U. Sevilla was the first principal.

The emergence of this institution materialized after 20 socio-civic spirited donors laid down their resources, spearheaded by then Mayor Jovito O. Claudio whose vision and dedication to the people of Pasay was guided with so much wisdom to establish formal institution of learning in Malibay. He never ceased pursuing his vision and on the 8th of July 1968, the institution was    inaugurated with the late Dona Josefa Edralin Marcos as the keynote speaker.

Established as one of the campus annexes of Pasay City High School on July 28, 1968,  Pasay City East High School became the new name of the school headed by Mrs. Maura Sevilla from 1970 – 1980 with the twenty eight (28) pioneer teachers and seven hundred twenty three ( 723 ) enrollees. There were seven (7) sections in the First Year level, five(5) in the Second Year, two (2) in the Third Year and two (2) in the Fourth Year. The first high school graduation was in 1972 . This was the initial resulted to an increase in enrolment and community involvement.

PCEHS has a total land area of 7650 square meters with Timoteo Paez Elementary School beside it. It was difficult for the students and teachers during the early times because of lack of classrooms. Dry and wet seasons were both a sacrifice for everyone. Floods would most of the time burdened the school and its community. Thus, with the concerted effort of the City School Board Officials together with the Parent-Teacher Association headed by President Ildefonso Barbon , funded the project to elevate the school on a higher ground to ensure flood safety during rainy season.

The project was completed during the time of PTA President Manuel C. Trinidad. The concrete “bakod” and gate secured the safety of the students,

The school was slowly in its progressive growth but it wasn’t spared from natural calamities. Nov. 19, 1970 when Typhoon “Yoling” ruined six (6) classrooms and unroofed the gymnasium. But this calamity didn’t waver the spirit of resiliency and the gymnasium was put back in its shape in February, 1971.

Continuous support from the PTA created projects like “Marcos Pre-Fab” building for Practical arts classes and additional 2 classrooms respectively built in 1973 and 1979.Lokewise, in the same year, construction of “Bagong Lipunan” building was started but the cost of materials soar high that it took longer than expected  for its completion in 1981.

In 1982, “Marcos Bldg. and Techno Bldg.” were inaugurated. Waiting shed was built through the PTA projects and funds. Moreover, in 1986 the two-story Practice House for the Home Economics was built and completed in 1987. It was in 1989 when the NCR Bldg. for the Audio Visual System was built.

Time has witnessed the evolution of changes in PCEHS. Evidences of these were the school buildings such as  Briones Bldg., Verano – Yap Bldg., Claudio Bldg. and Peewee Bldg. .

At present, the 2-storey  Administration Bldg. holds the Faculty rooms (ground floor), Records Section, Medical and Dental Clinic, SBM Center ,Guidance Office and the principal’s office . The School Library( with internet access), DCP Rooms and Library Computerized Research Center are all on the 2nd floor while the gymnasium is on the 3rd floor

All in the Calixto Bldg. are the Senior High School classrooms and the Laboratory Kitchen of Technology-Vocational and Livelihood Track for Bread and Pastry and Food and Beverages while in the Peewee Bldg., housed are the School Managed Canteen, Prayer Room, Audio Visual Room, Laboratory Saloon for Beauty Care and Barbering (SHS). The Teachers’ Cooperative  Canteen and TVL Laboratory Shop of Practical Arts (SMAW, Electricity and Woodworking) are in the Techno Bldg.

All of these plus the undertakings of the following school heads/principals had moved the school to dedicate itself as a Center of Excellence and a symbol of Virtue and Perseverance. 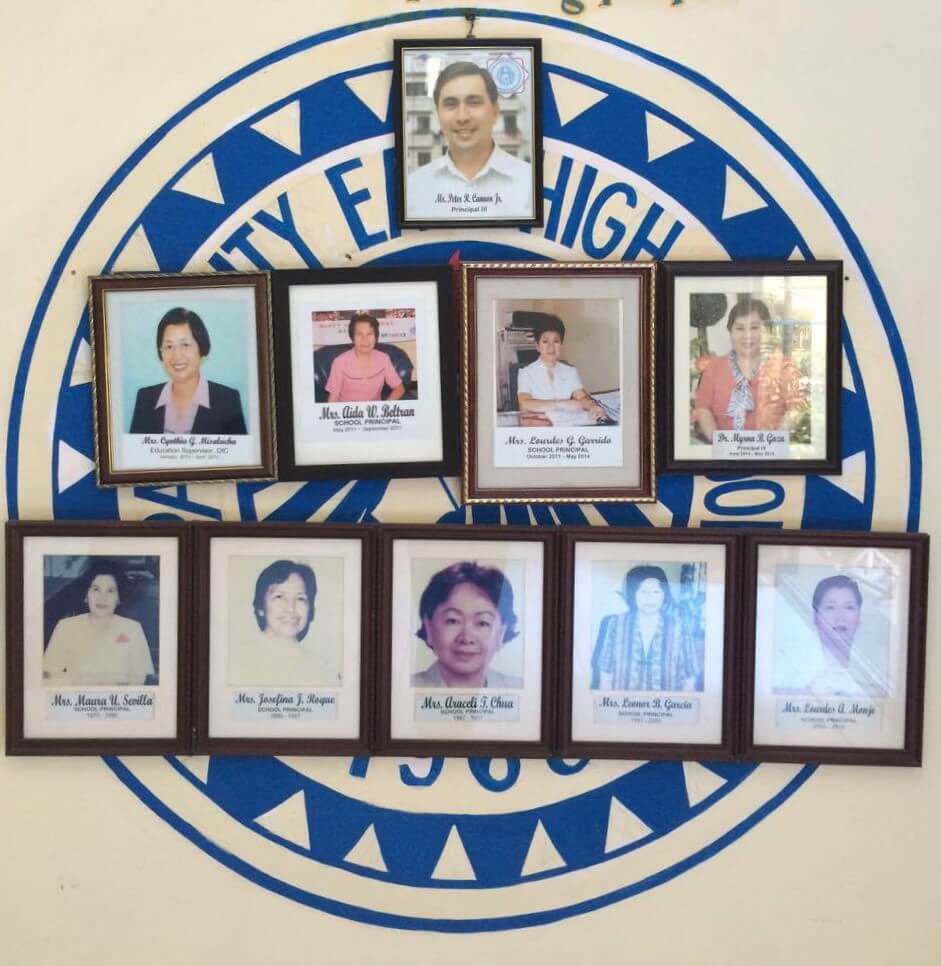